I had the distinct pleasure today to teach the first ever class in the Utah Valley University Melisa Nellesen Center for Autism DURING the ribbon-cutting ceremony - think media coverage, large crowds, heightened emotion. So, what did I teach?

Arts & Bots, of course!
For this event, we combined the final exam periods for our Elementary Education pre-service program Instructional Media and Creative Arts Methods courses into a 4-hour experience. We discussed the mission of the CREATE Lab - to empower children of all walks of life, and particularly those who are underserved, at-risk, and perhaps on the Autism spectrum, to learn and grow and succeed. We then spent some time getting familiar with the Hummingbird board and all of its inputs and outputs and practicing some basic computer science concepts before getting to their task.
The learning target for the day was to: Represent a local, regional, national, or global issue you are concerned about using visual art and robotic components. They were inspired by a model created by an 11-year old, using fine art as backdrops for the life cycle and endangered status of sea turtles. They then created their own works through re-mixing and creation of original pieces that explored the issues of climate change, poverty, diverse classrooms, and more.
This was an eye-opening experience for these future teachers as they considered how technology, arts, and project-based learning might both hugely benefit broad populations of students and simultaneously cover more curriculum across more subjects in less time than traditional, sequential teaching methods.
It was an honor and a privilege to teach in this context today, using Arts & Bots as a vehicle to communicate love and concern for all children in our school system!​ 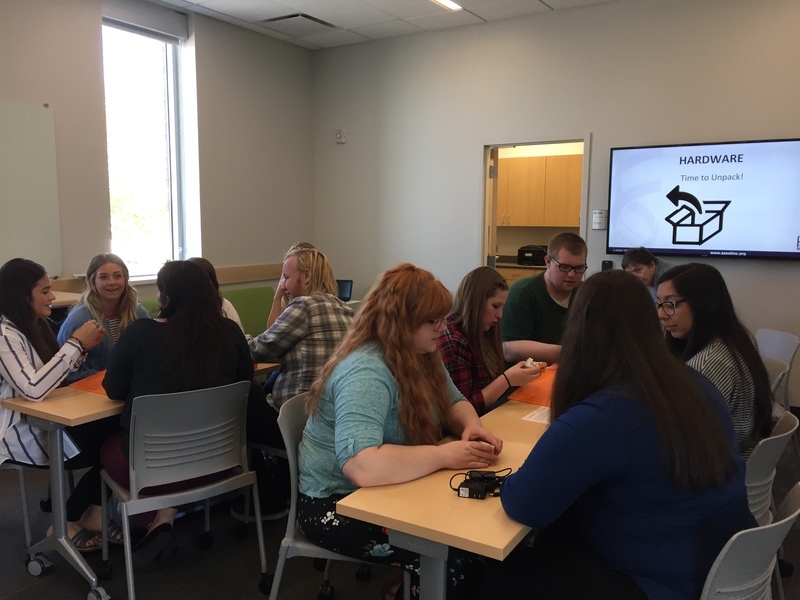 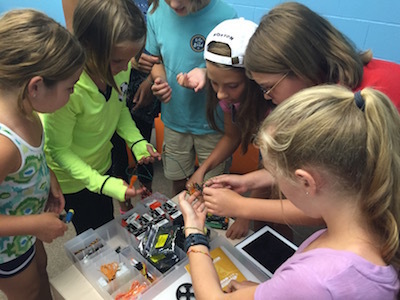 For 14-year-old Fox Chapel Area School District freshman Annika Urban, teaching comes naturally. Annika is used to public speaking, and when she does have a podium, it is usually to share her knowledge and passion for STEM with others. Being interviewed for videos and in the media, speaking in front of her peers, teaching classes, presenting at conferences, showcasing her work at national competitions, and even meeting the President, these are all part of Annika's repertoire.

As part of the Fox Chapel Area School District's focus on encouraging STEM, Annika, along with two of her friends, co-taught an elementary summer programming class last summer. Wanting to continue teaching STEM classes to young students this summer, she started a new outreach program called SENSE (Student Exploration Network for Science and Engineering). SENSE is supported by the District and funded from Annika's $1,000 2nd place award in Engineering at the 2014 Broadcom MASTERS competition. The first course series would be focused on teaching robotics and empowering girls in STEM-related fields.

“I love teaching younger kids skills like robotics and computer programming-- watching the kids learn new skills and become so excited when they accomplish the task that they have been working so hard on is amazing.”

On August 18-20, 2015, Annika hosted eight young girls in O'Hara Elementary's Digital Dream Studio maker space. The girls, entering grades 4-6, begin exploring the world of programming, robotics, design, and STEM career pathways. Focusing on girls was a special priority as fewer women pursue science and engineering majors than men (AAUW, 2010). Annika and the District hope that these sessions could be a bridge to closing that gap.

Using the Hummingbird Robotics Kit and encouraging a positive growth mindset, the young female students were able to move through the process of understanding both the technical challenges of programming and building, as well as begin to understand how robotics interface with and affect the real world.

Students explored how they currently interact with robots and learned about the initial programming and sensor interaction process, servo manipulation, and the design process. During the three-day series, Annika guided the students to areas of deeper learning and strengthened their individual and group confidence through challenges and activities that fostered supportive conversation and constructive critique. On the final day, students were asked to consider human-controlled interaction (HCI) and create their own original robot moving from initial design, to programming, building, prototyping, showcasing, and sharing.

Annika and FCASD plant to continue the SENSE series in programming and robotics throughout the year and into next summer.

Written by Scott Hand, Reposted from FCASD.edu with permission